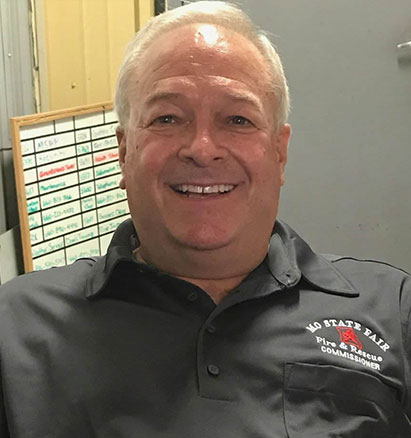 The Division of Fire Safety salutes Highlandville Fire Department Deputy Chief Charlie Neubert. Charlie began his fire service career in 1971 as a junior firefighter in Ballwin. He would rise through the ranks to serve as a captain in the Eureka Fire Department, before becoming chief of the Southern Stone Fire Protection District.

He’s been a member of the Fire Fighters Association of Missouri since 1973. Beginning as a junior firefighter, and working his way up through the ranks. He served as chief from 1988-89. Charlie served as FFAM State Fair Fire Commissioner from 1994-2017, and as a member of the FFAM Board of Directors for 33 years, retiring as second vice president in 2017.

Charlie has also been active in his community and now lives in Branson. Charlie, Missouri State Fire Marshal Tim Bean salutes your service and dedication to Missouri’s fire service and the citizens of our state!

Learn more about the Highlandville Fire Department on their Facebook page. 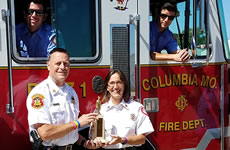 While pursuing a degree at the University of Missouri, Lisa took an EMT course, during which she developed an interest in EMS and the fire service. Lisa received a Bachelor of Science Degree in biology in 1992 and joined the Boone County Fire Protection District in 1994. In 1997 she obtained a paramedic license and began working as a paramedic at Boone Hospital and University Hospital.

In 2001, she was hired by the Columbia Fire Department, where she moved up through the ranks, being promoted to engineer in 2004 and then to acting lieutenant in suppression. In 2012, she became lieutenant and assistant fire marshal in the Fire Marshal’s Division. In 2014, she moved to training as captain of training, and finally training chief in 2017.

Lisa is assisting with accreditation, implementing an electronic training program for suppression and putting recruits through basic recruit school. She is also medical coordinator for the department, which has 141 uniformed members. Columbia has nine fire stations covering approximately 65 square miles with a population of 120,000 residents. The student population adds approximately 30,000 additional residents. In 2016, the department responded to more than 12,000 calls for service.

Lisa was born and raised in Kirksville. She has called Columbia home since she attended college. When she is not training, Lisa loves to spend time with her daughter and horseback ride.

Learn more about the Columbia Fire Department on their Facebook page. 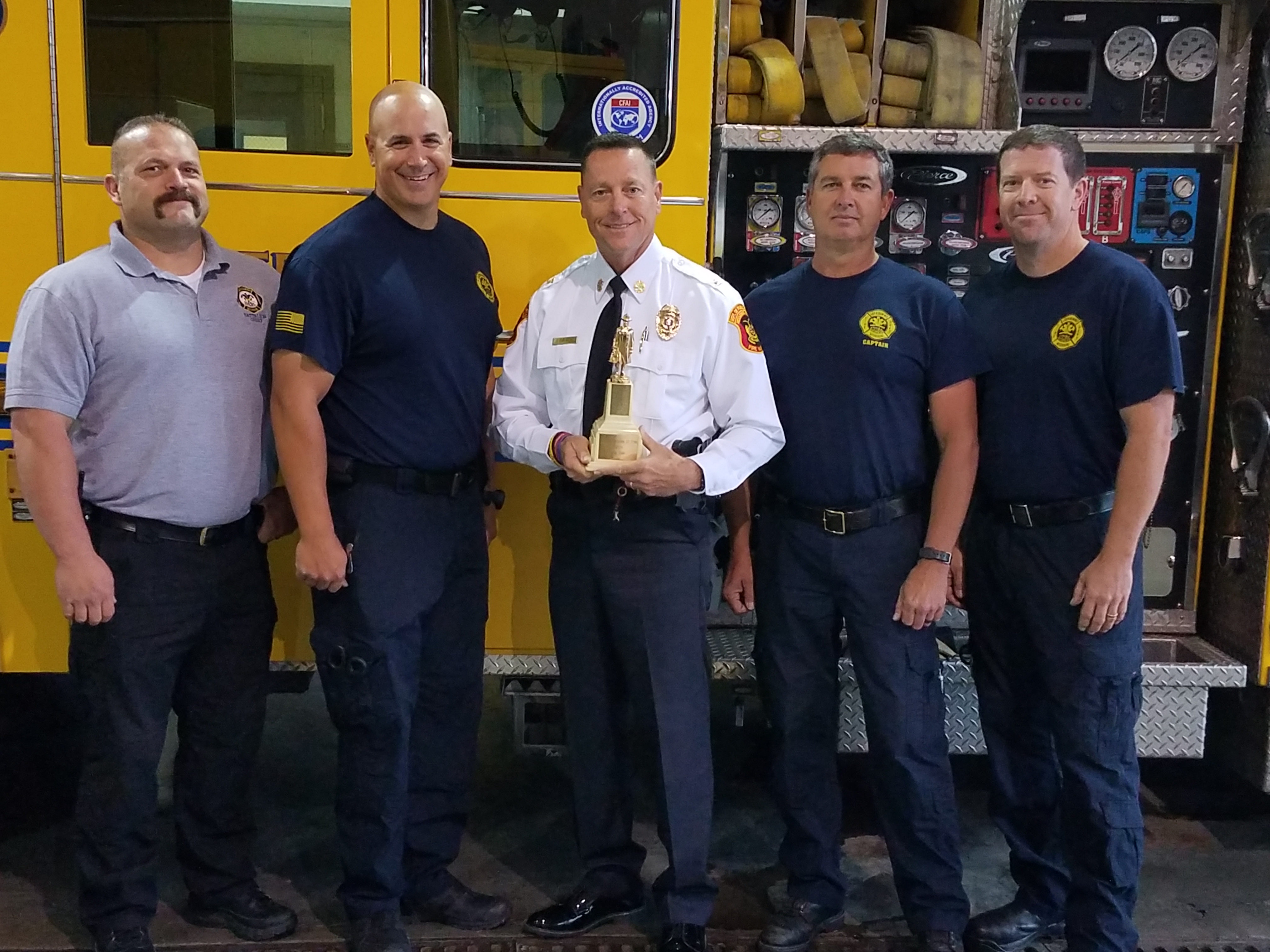 Heartland Honor Flight flies approximately 90 veterans of WWII, Korea and Vietnam to Washington, D.C. twice a year. The day is filled with sightseeing the war memorials, Arlington National Cemetery and each branch of the military’s memorial. The day begins at 4:30 a.m. and ends at 10 p.m. for the veterans. Being able to give back to the veterans who have made this country what it is today makes the day memorable for all.

Captain Loy has been with the Lee’s Summit Fire Department 30 years, serving 17 of those years as a captain. Captain Loy is a veteran of the U.S. Marine Corps and has flown with Heartland Honor Flight nine times as the staff lead paramedic.

Fire Specialist Hill has been with the Lee’s Summit Fire Department for 15 years and currently serves in the U.S. Air Force Reserve as a staff sergeant. Specialist Hill has flown with Heartland Honor Flight twice as a guardian/escort for the veterans.

These men continue to go above and beyond in their service to the community and their country and for that reason, we salute them!

Learn more about the Lee's Summit Fire Department on their Facebook page. 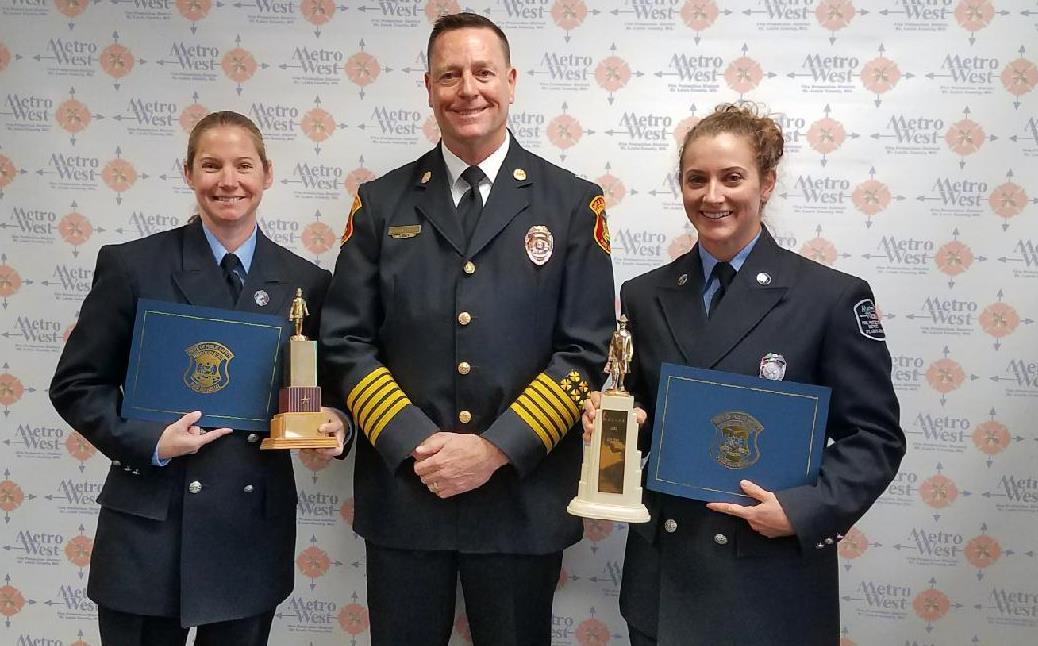 The Division of Fire Safety salutes the service of two St. Louis-area firefighters who have devoted their time and effort to introducing teenage girls to the opportunities provided by careers in the fire service and as paramedics and police officers.

This past summer, almost 20 girls attended the week-long camp that gave them a glimpse into the life of a first responder. They climbed firetrucks with ladders reaching over 100 feet, they put out fires, used the jaws of life and learned how to communicate with violent criminals in high pressure situations. Camp Fury brings female campers interested in emergency services together with mentors in the profession who are successful and ready to give back to the next generation of emergency responders.

Anderson and Wiegand have devoted several years to the effort to open what was the eighth Camp Fury in the U.S. They were determined to do it so more young women would have awareness of a career as a first responder.

Anderson and Wiegand are grateful for all the efforts and support the first responder community has provided and is looking forward to the continued success of Camp Fury for years to come.