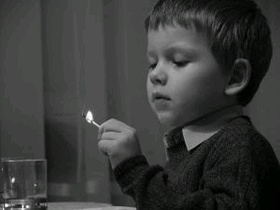 It is crucial that parents discuss fire safety with their children. According to the National Fire Protection Association, in 2010, U.S. fire departments responded to an estimated 44,900 fires that were started by someone, usually a child, playing with fire. These fires caused 90 civilian deaths, 890 civilian injuries, and $210 million in property damage.

To protect your children from fires, consider the following safety tips: