The Missouri Division of Fire Safety was assigned responsibility for overseeing blasters and persons using explosives by the Missouri Blasting Safety Act, which became law on Aug. 28, 2007. The act’s purpose was to foster the safe use of explosives in mining and construction by establishing and enforcing consistent statewide industry standards for licensing of blasters and users of explosives. The act requires registration by most entities that use explosives and the licensing of persons performing blasting. The act is not to be construed to amend, supersede, or conflict with any requirement of federal law or regulation governing the manufacturing, transporting, or storage of explosives. 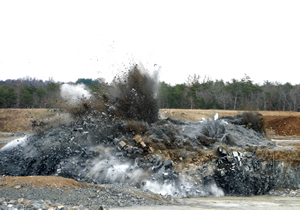 Any individual, proprietorship, partnership, firm, corporation, or company which uses explosives in Missouri shall register with the division prior to using explosives. The initial registration shall state the name of the person, address, telephone number, facsimile number, e-mail address, and name of the principal individual having responsibility for supervision of the use of explosives.

Any explosives users within Missouri shall notify the division in writing or by telephone at least two business days before using explosives at a site where blasting has not been previously conducted. If blasting will be conducted at an ongoing project, the user shall only be required to make one notice to the division before the first use of explosives.

Licensing of Blasters in Missouri

Blasters must submit an appropriate application to the division, including all required documentation. A license may be granted to applicants who within the last three years have held a valid license or certification from another source if all of the qualifications for obtaining the license meet or exceed the provisions of this section.

A blaster's license shall expire three years from the date of issuance. To qualify for renewal, an individual must provide documentation of completing eight hours of approved explosives-related training, at least half of which shall have been completed within the year prior to renewal.

The Missouri Blasting Safety Act regulates users of explosives, which are defined as “any individual, proprietorship, partnership, firm, corporation, company, or joint venture that is required to hold authority to receive or use explosives under statutes or regulations administered by the U.S. Department of Justice, Bureau of Alcohol, Tobacco, Firearms and Explosives and who employs licensed blasters.” This does not include universities or trade schools for instruction or research; forms of explosives used in medicines; training or emergency operations of any federal, state, or local government, provided they are acting in their official capacity; use by the military; the use of pyrotechnics; the use of small arms ammunition and components thereof; use within an industrial furnace; the use of agricultural fertilizers when used for agricultural or horticultural purposes; explosives used for lawful demolition of structures; use by rural electric cooperatives; and the discharging of historic firearms or cannons. The act also regulates blasters defined as persons “qualified to be in charge of and responsible for the loading and firing of an explosive or explosive material.”

The Missouri Division of Fire Safety is charged with the enforcement of the act, including the testing of blasters and to investigate violations of the act. The State Blasting Safety Board, appointed by the governor, has the duty to advise the state fire marshal in the development of application and registration forms, training, examinations, and setting fees for the filing of required applications, registrations, and reports; approve or disapprove any examination for licensing of blasters; hold hearings upon appeals and notices of violation; approve any rule proposed by the Division of Fire Safety for the administration; and advise or assist the division in any other matter regarding administration or enforcement.

The Division of Fire Safety is mandated to investigate possible violations of the Blasting Safety Act upon the complaint of any citizen who believes explosives are being used in a way that endangers the public's safety or property, or upon any cause for the state fire marshal to believe that a violation is occurring. Division investigative staff members have completed approved blaster training and are qualified investigators. Any person using explosives who the state fire marshal determines, upon substantial evidence, to be in violation of sections 319.300 to 319.345 may be issued a notice of violation by the Division of Fire Safety.